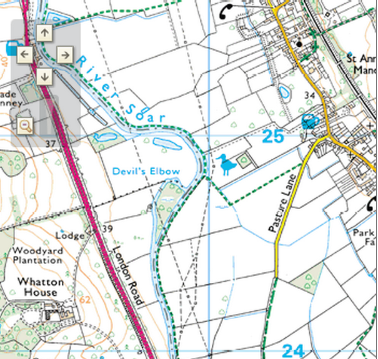 The club was initially situated on the River Soar between Hathern and Kegworth on the A6. The Boathouse was a short walk from the road to the bend in the river named Devil’s Elbow, hence the name of the club. In 1826 a canal, named “Jimmy Gadd’s Cut” after the contractor, was cut through to the east of the difficult bend making it easier for commercial barges to navigate. The old boathouse is actually situated on the original bend in the river, now a backwater, leaving the remaining land named Tongue Island.

The club unfortunately had a few difficulties in setting up at this boathouse with floating pennywort an invasive water weed preventing rowing, local council issues in accessing the boathouse from the A6 dual carriageway and legalities with planning permission despite previous usage by Sutton Bonnington Rowing Club.

This prompted the big move to Trent Valley Sailing Club opposite Trent Lock in January 2012, where we are now based. This wide 2.5km stretch on the River Trent / Soar confluence is excellent for junior rowing, recreational rowing and competitive training. The stretch of river is great for beginners as the slow wide bends on the river are easier to navigate than the narrow confines of the River Soar. The positioning of the club also gives access to a few different routes for touring and training. The canal is superb for when the river is too fast and perfect for coaching singles and doubles.

The two clubs, TVSC and DERC came together to apply for a grant to replace the TVSC’s boathouse. We were successful in getting £50,000 and the new shared boathouse was opened in Oct 2013.