Devils Tails from the Riverbank 7 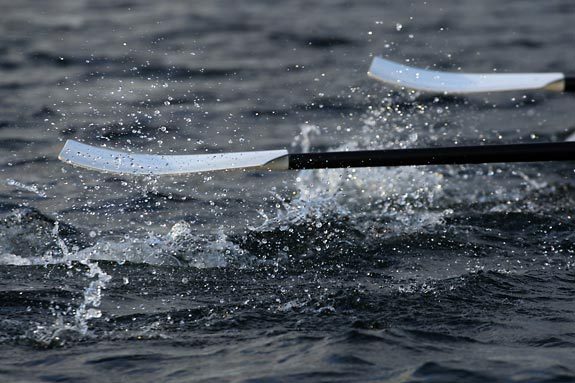 Devil’s to the Rescue.

I’ve got loads more to tell you about our regattas so far this year, including the left-overs from last edition’s Trentham tale, the (Old) Masters at Holme Pierrepont and the quality and succulence of the bacon cobs at Leicester Regatta, not to mention the story about the narrow boat.  However, some of our members have just come back from an ‘away tour’ to Lithuania with a tale worth the telling, so I’m going to do that instead and put off regattas for another couple of weeks.

The ‘away tour’ has been a more or less annual event for Devil’s Elbow for quite a few years now, as a joint venture with some relatively like-minded folk from Nottingham Rowing Club. I get the impression that Nottingham’s ‘explore’ rowers (people who row in broad, stable, non-racing ‘explore’ boats – meant for navigating choppy waters and being drawn up for picnics on sandy beaches on uncharted shores, as such trips often require) don’t tend to row ‘fine’ racing boats in anger as most of us at Devil’s do. There aren’t many of us, and I think we have loads of experience of working together in pursuit of our dreams. When things get challenging, as they clearly will do in a bit, (otherwise I wouldn’t be subjecting you all to this unnecessarily lengthy preamble) you need people around you who can work together to get the job done. This is where we step in, as you will shortly hear.

These trips have been instigated and organised over recent years by Richard Pickup, one of Nottingham Rowing Club’s finest and best. I went on last year’s away tour to Venice, where we took part in the 2018 Vogalonga (Italian for ‘long row’, would you believe?) and I loved every minute of it. This year’s trip to Lithuania was going to be his last, sadly. Richard had advertised the trip throughout the British ‘explore’ boat rowing community and nine boat loads of people flew out to Vilnius in south-eastern Lithuania from all over Britain a week last Thursday (6th June) and stayed there for a couple of days before converging on Trakai, about 10 miles to the west (time for googlemaps , I think) where there are some large lakes and, by happy coincidence, an international rowing centre of all things. Our Devll’s had booked accommodation through AirBnB and Vilnius and Trakai were the two places they laid their heads (not altogether quietly – but more about that next time).

Friday’s adventure was to be a beautiful row down the River Neris and sufficient boats (but not quite enough blades) had been transported to the starting point by the local Lithuanian rowing community. A full Devil’s Elbow crew had been assigned to one boat (Paul & Max Kavanagh, Jo Pickford, Sue Booth and Jim Hawkins), though with all the hoo-haa over the blades, they started the day with only three pairs, being the nice, mature, helpful and considerate people they are. So, they’ll have spent the first 10km stretch before lunch with three rowing, one coxing and one spare part to do the singing, telling of jokes, dabbling of feet in the water and setting of fishing lines, changing places as their collective desires and consciences dictated. Our other two heroes (Clare Sedgwick and Amanda Sherwood) had been allocated to a very ‘nicely spoken’ boat load from Oxford. I’ve not heard much about their day. The river at this point was about as wide as our stretch of the Trent and came with a health warning that the stream was quite fast (about 5 miles an hour), the level was quite low and there were rocks around, so they should look out for them. And with that, our heroes set off, had a lively, exciting row downstream and beached their boats at the lunch spot to find a fantastic spread laid on for them by the locals. What could be a better way to end a beautiful morning?

Then the telegraph wires started jangling and a message came through to say that a boat had got into difficulties upstream and were there any volunteers to pop back and give them a hand? How far upstream? Nobody knew at the time, but it turned out to be just below the start. Naturally, our Devil’s stepped up, on condition that somebody would give them a set of blades. It’s amazing how selfish people can be in times of famine (remember the empty shelves in ASDA during the tanker drivers’ strike?) but it would have taken a very thick skin indeed (as well as the moral integrity of a pterodactyl) to deny our heroes that small comfort. Two boats set off back up against the stream, leaving Clare and Amanda to tuck into their lunch in the sunshine with their new friends from Oxford, pop their shades on and laze around on the bank watching out for bits of wreckage to float by. It turned out to be a very long haul indeed against that 5mph stream, during the course of which all sorts of messages were coming through on the mobile grapevine. The full spectrum from  ‘They’re all fine. They got their boat to the bank and they’re all walking down the road. They’ll join you for lunch in half an hour’ to ‘They’ve sunk and they’re all going to drown unless somebody does something. Why won’t anybody help those poor people?’. The two boats got there, having passed another boat making its way downstream in a slightly hesitant and apologetic manner who were very glad that somebody else was going to help (rather than them). The other boat got there first and dumped their bow-man over-board to try to help them, then went and tied up at the bank out of the way. The wrecked boat was out in the stream, still on its rock with its full complement of people on board but obviously holed and with a lot of water in it. On the way up, our crew had swapped places from time to time and Jim happened to be coxing as they came up, which is a good configuration to have when the going gets tough because our Jim is a ‘fighting cox’ in the finest Derbyshire tradition (despite him hailing from Long Island). You know what happens when there are too many experienced and worldly-wise grown-ups around, all with their own ideas on what and how things should be done? You suddenly find there aren’t enough ‘injuns’ around to do it with, whatever ‘it’ is. So one boat was parked up on the bank to provide verbal support from there, one bloke was up to his waist in the raging torrent and when Jim brought our boat alongside, all the shipwrecked mariners suddenly galvanised themselves into action, having sat there nicely for the previous two hours, and abandoned their boat,  which promptly lifted off it’s rock and started to float off downstream, leaving something akin to the Titanic disaster with too many splashing around in the water and not enough lifeboats. With the swimmers now grabbing onto anything they could lay a hold of and threatening to immobilise and wreck or capsize their rescuers, Jim put his stamp on proceedings and gave them the verbal equivalent of a good beating around the head with a paddle until they behaved in a sensible manner. In the end, order was restored by his command of a highly competent and disciplined crew, two passengers were taken on board for the journey down to a very late lunch and the others were brought to shore to their waiting transports whilst the wreck drifted down onto a sandbank and was recovered from there later. One water-proof bag of personal belongings had drifted off during all the excitement, but our Devils picked it up on the way down, so that was that.

I think it’s fantastic that the world has people like Richard in it, who are prepared to go to such trouble to organise ventures like this for us. I’m sorry this was to be his last trip of this kind, but I hope he has had some satisfaction out of doing them over the years. We’ve certainly enjoyed them very much. Praise was heaped on the men and women of Devil’s Elbow for mounting such a highly competent rescue and Long Eaton can be very proud of them, resplendent in their racing colours (even if they are pink).

The afternoon’s row was a lot less eventful after all that, to the great relief of some of those involved. The food and hospitality was absolutely fantastic, from what I understand (well, this is important stuff, I think). That’s probably more than enough for now. The rest can keep for next time.