Devils Tails from the Riverbank 4 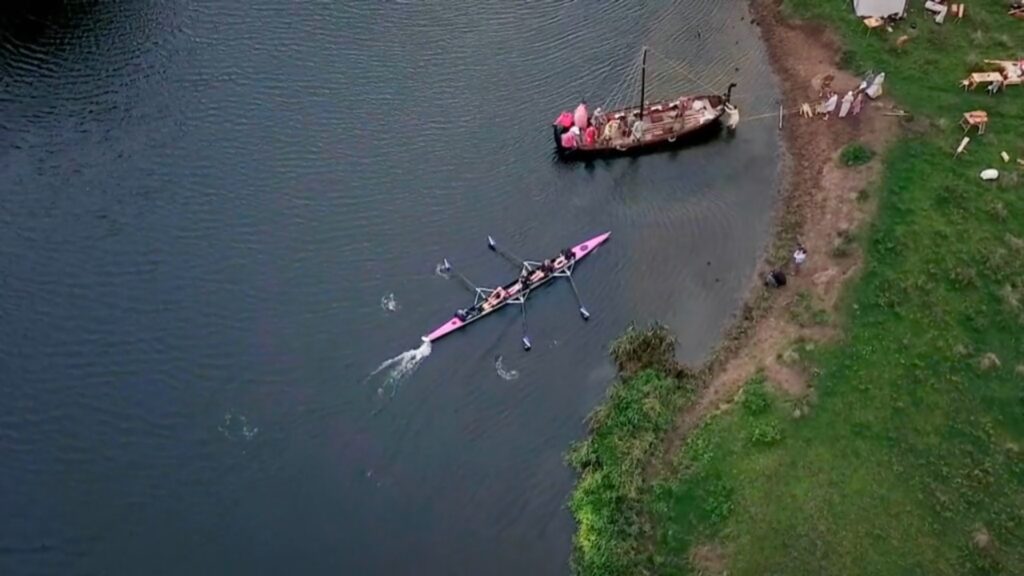 The Day the Vikings Came.

Now then. I’m going to tell you a bit about our Viking Invasion down at Trent Lock because this is the completely off-the-wall stuff that makes our lives that little but less hum-drum and predictable. You’ll have heard of The Sealed Knot who get together, dress up in period costume and re-enact historical events. Well, there’s a different lot of similarly minded folk who concentrate their spare time on being Vikings in the same sort of manner. I guess The Sealed Knot need somebody to fight from time to time, don’t they? The idea was that they were going to launch their long-boat somewhere in the region of Trent Lock, paddle (or maybe sail?) up-river, through the lock at Sawley Marina (which hadn’t been invented then – but let’s not get too bogged down with that sort of detail) and finish up that day’s madventure somewhere higher up the Trent, where they were going to haul their boat up out of the river Viking-style and have a party (also presumably Viking-style with all that that entails – Mead? Ale? Tree-fighting? Pillaging? Settling down and establishing homesteads in Yorkshire? I don’t know. Perhaps we’ll find out when it comes out on the telly).

In the planning for their filming though, they hit upon a snag in that there weren’t going to be enough Vikings in their boat to drag it up out of the river. I imagine they’d normally have recruited the services of some local (and by this time, presumably slave) labour. In the event, having spent a bit of time scouting the area for a suitable slipway to launch from, they discovered Devil’s Elbow Rowing Club and hit upon the idea that, as evening drew near and they wanted to get ready for their party, who should come rowing by but a helpful boat-load of 20th century oarsmen and women who beach their craft alongside and lend them a hand. Everybody then mucks in and they haul their long-boat up onto the sort of beach that 9th century cattle would use when they wanted to go for a paddle in the river; a tradition that’s been evidently handed down from cow to calf for countless generations since, because the film’s producer managed to find a very fine (and very recently used) example about half a mile upstream of where the Trent goes under the M1.

That was the bit of the plot that we were involved in, as far as I know it. The rest, I hope to find out when it gets broadcast, which we have just heard will be on Channel 4 at 8pm on Easter Sunday (21st April). Prime time telly. Wow!! We’re going to be famous, at least some of us are, for a short while until the ripples have all died down again. It all sounds completely bonkers, so It’d be a terrible shame to miss it. Beats the pants off politics anyway. The great irony here though is that you’ll probably be reading this at least three days too late as we weren’t told about it in time to catch the previous issue of the Website Extra, unless the fickle nature of broadcasting scheduling has a late part to play. The film is called ‘Britain’s Viking Graveyard’ and the presenter’s name is Mark Horton. He’s an archaeologist and often on TV, from what I’m told. If you missed it, then I expect the clever ones amongst you will presumably know how to dredge it up off the internet or on catch-up TV or something (dredge-up TV?).

So, if any of you were flung into panic and confusion by the presence of a Viking pillaging party making its stately progress up the Trent one very windy Saturday last October (the 13th, to be precise), accompanied by a safety launch and a filming drone, hopefully this will set your mind at rest. They’d found a slip-way big enough to launch from just a little way up the River Soar at Redhill Marina, having found ours at the sailing club not nearly manly enough, so you might have seen them anywhere from there up to just past the M1 above Sawley Marina. The film will hopefully tell us whether they made it all the way up to Repton or not.

I had intended to tell you a bit about how our club started and where we got our name from and that sort of thing. The story features our founding mother, Jooles Paillin, quite a lot (presumably, by the time you read this I’ll have found out whether or not she minds me calling her that). She’s currently embarking on a plan to row across the Atlantic. Quite a long way when you think about it, so that should give you some idea of what she’s like. Anyway, I’ve kicked her can down the road a bit to squeeze the Vikings in (even if they are three days too late) so I’ll tell you more about that next time. Also, our Learn-to-Row course will be running this year for five Tuesday evenings (starting on 30th April). There are still places available I think, so if you fancy trying your hand at rowing then please get in touch with our membership secretary by email (devilselbowmembership@gmail.com) or via this web-page (http://www.devilselbowrowing.co.uk/learn-to-row.php).